In November, after seven years, President Endo and Yusuke Iseya once again had a conversation at Shion-an, KAI’s guest house in Seki City, Gifu Prefecture. Here is the summary of their talk. The theme of the conversation was “Craftsmanship and Sustainability”. Since the Sustainable Development Goals (SDGs) were adopted by the United Nations in 2015, we’ve become quite familiar with keywords such as “sustainable” and “ethical”. On the other hand, it is also true that superficial efforts are increasing. “For 11 years since launching the REBIRTH PROJECT, we have stressed “The lifestyle of one earth”. If people all over the world lived the same way as Americans, we would need five earths. If you look around the world, you can tell that the consumer level in Japan is still very low. In order to change values from comfort to sustainability, we will cultivate concepts that capture issues on a global scale and increase the number of Japanese people who can act responsibly. I think it is crucial,” says Iseya. “Actually, KAI made a razor made of biodegradable plastic more than 20 years ago,” says Endo. “However, because of its high price, it was not accepted by consumers. The sustainable Japanese spirit of “Mottainai” should fit the current trends in the world. Regarding the SDGs, which is a common goal worldwide, KAI has been operating without pursuing instant profit. Currently, sales and profits are the main figure to measure company success. But in the future, the SDGs perspective will become more important, even for the consumers who choose companies.” “It would be nice if we could create a system that could quantify the SDGs and provide scores for the corporate and home versions,” says Iseya. “I would like to send out more ideas about the evolving SDGs and new lifestyles to the world.” You have a chance to hear further dialogue on the new EARTH RADIO! 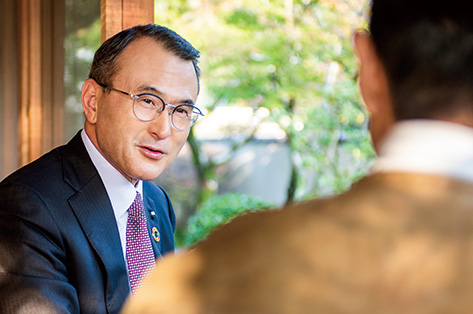 KOJI ENDO,
KAI Group PRESIDENT and CEO
President Endo was born in Seki City, Gifu Prefecture in 1955. In 1989, he succeeded his father and became the third generation President. With the desire to “provide better products for more people,” Endo strives for sustainable growth of the KAI Group throughout the world.

YUSUKE ISEYA,
President of REBIRTH PROJECT Co., Ltd.
Iseya was born in 1976. An actor and film director, his REBIRTH PROJECT started in 2008 and asks, “What should humans do to survive on the earth?” The goal is to continue implementing solutions to social issues in businesses and projects.