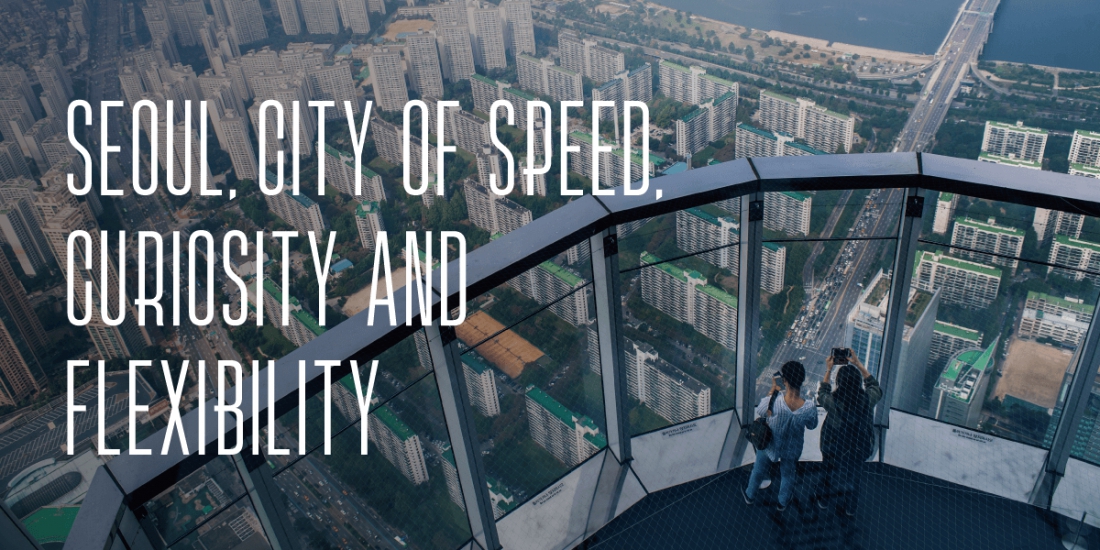 Seoul is changing everyday and the economy and culture will advance with new blending and speed.

‘Expedience’ is the general tone of the Korean people.
Urban Development, Manufacturing, Fashion, Beauty etc. in all aspects, it develops with phenomenal speed.
It is attributed to the character of Korean people, who are sensitive to the latest trends.
Due to the national character of curiosity, Seoul has created many things quickly and has grown rapidly.

Located on the former site of the Dongdaemun Stadium where a baseball stadium and soccer field once existed, Dongadaemun Design Plaza’s unique architecture with a curved design, designed by Zaha Hadid opened in 2014. During nighttime it is always lit up, there is an abundant atmosphere of being in the near future. It is the base for Seoul's art and design. 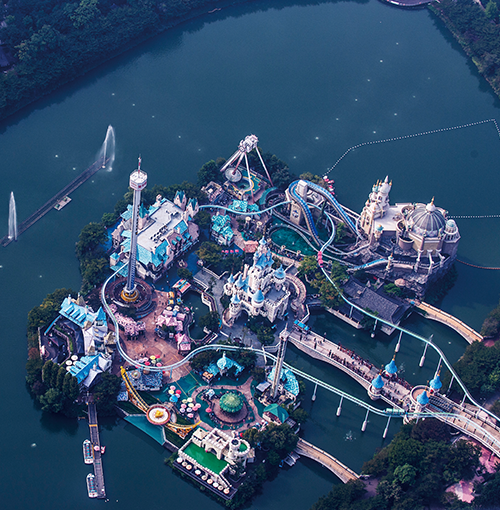 ‘Lotte World’ is one of the most popular amusement parks in Korea and part of it, ‘Magic Island’ seems to be floating on a lake. In addition, there is an indoor type ‘Adventure’ where you can play without worrying about the weather.

‘Mr. Holmes Bakehouse’ was born in San Francisco, the croissant and muffin hybrid called a ‘Cruffin’ is popular. Their second store opened in ‘Garosu-gil’. It symbolizes Seoul’s drive to follow the latest trends. ‘Mmm Records’ in Itaewon is a record shop organizing various music events and art exhibitions by DJs. Store owner, Jeon Woochi is using his influence to keep the culture of vinyl music alive.

‘N Seoul Tower’ had a large-scale renewal in 2005. Since it is built on the top of Namsan Mountain, you can see the entire city of Seoul from the observation deck. It is also pleasant to hike from the foot of the mountain to the top. 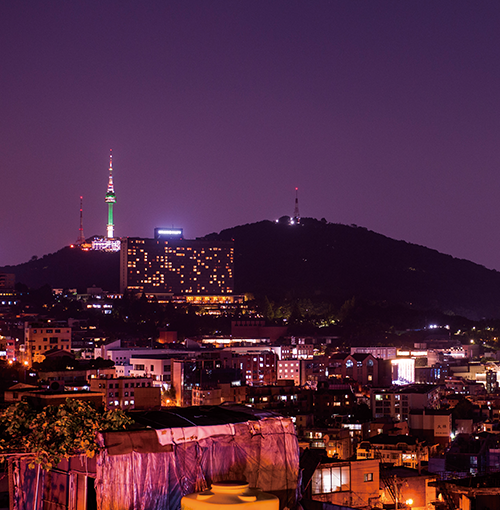 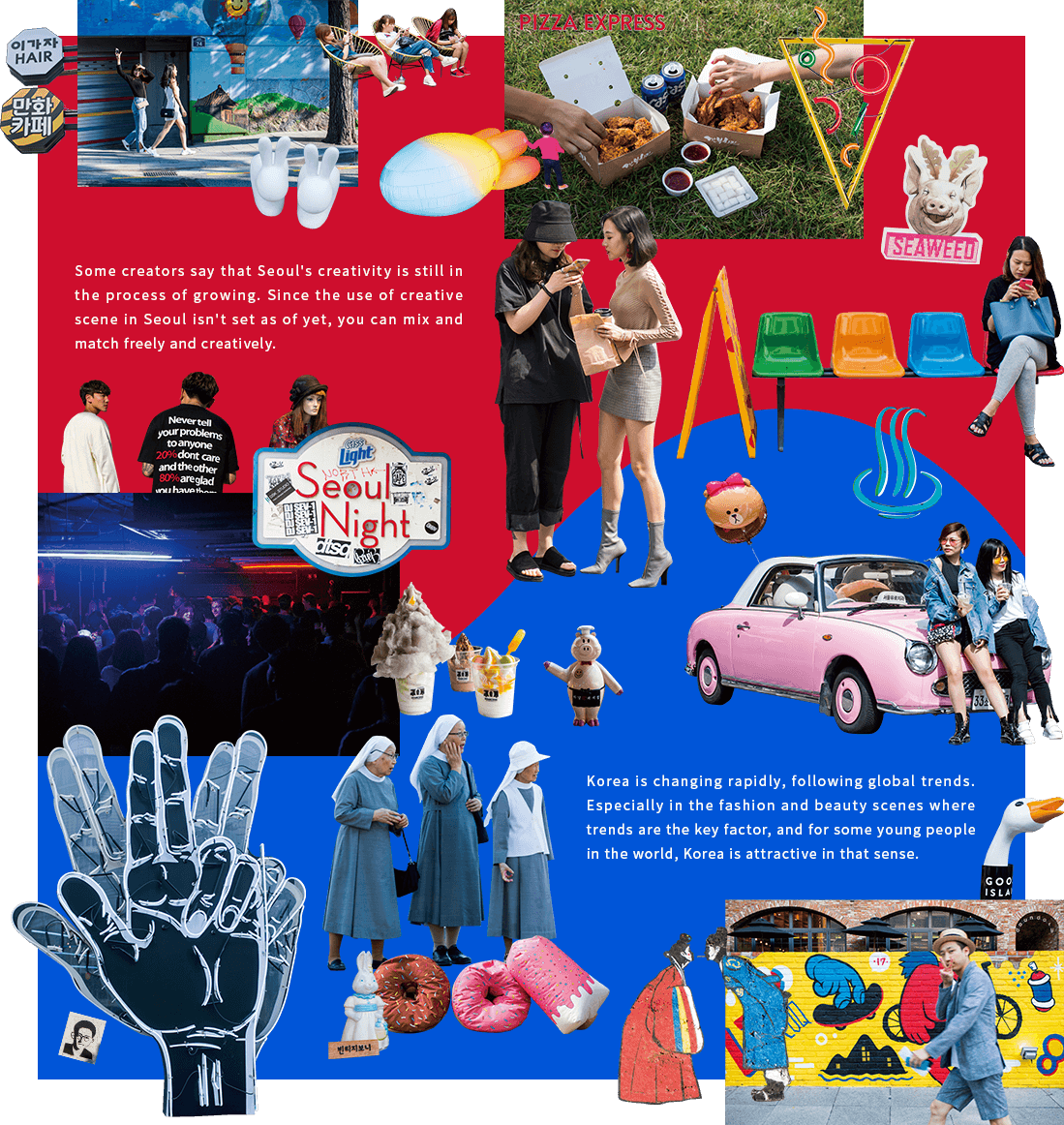 Korea's creative scene made with
speed and variety.

The people of Seoul are curious and broad-minded. Art director Mijae Kim is leading the scene as an art director and brand consultant, while supervising and designing cafe spaces, graphics, decorations, etc. ‘Seoul is unique for its speed. Projects progress at incredible speed and usually surprises business partners from other countries’ says Kim.

Jeon Woochi runs a creative agency and publishes magazines, has record shop, organizes parties, creating new media genres to introduce young artists and authors. ‘Korea’s creative scene has evolved rapidly and in that process, various things are mixed. Our mixing culture is quite unique in the world.’ says Woochi.

Yeji Yun is the illustrator and she feels that the speed of Seoul is tough enough not to give one any rests or breaks, yet, if you can catch up to that pace, you can build yourself up rapidly. Seoul’s creativity may be nourished in such a harshly rapid environment.

Cha Hae Young runs ‘Studio Concrete’ and works only with clients who can create synergy together, looking for quality.

Seoul’s craftsmanship is under the unique, rapid progress, and we can’t take our eyes off, how it evolves.