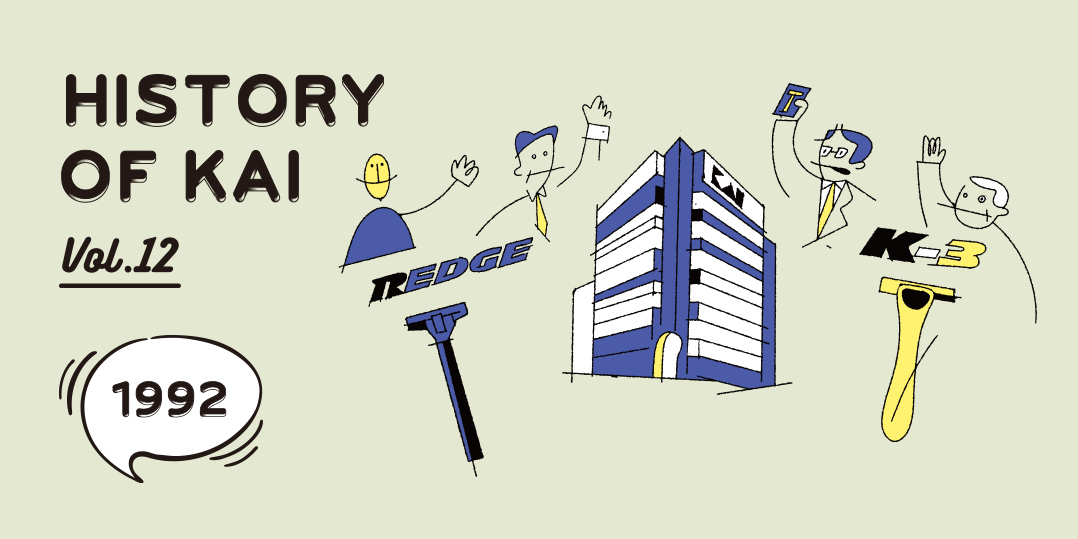 In 1992, the third generation president Koji Endo took office, and in his third year, he started the long-awaited company reform. At first, he merged six companies that had been split up and established KAI Industries Co., Ltd.

Koji focused on removing the barriers between the production and sales divisions through equal treatment of divisions and a common personnel system. He also strived to create a better manufacturing environment through policies that encourage employees to learn about management’s mentality.

In the following year, the current Tokyo headquarters building was completed in Iwamoto-cho. But at the same time, this era took place in the midst of the Heisei recession. Prices were collapsing, and severe economic conditions, such as the bankruptcy rush of major wholesale stores, continued.

Despite these conditions, the cosmetic products division had grown along with the development of convenience stores. On the other hand, a cosmetic wholesaler in Osaka, Marusan went bankrupt. Because buyers needed to find a new supplier, KAI took the opportunity to focus on non-hardware items, such as brushes and combs, as well as nails and tweezers in the “Well” series.

As part of KAI’s expanding business, Koji focused on health, medical care and beauty. This product and business development was named the “X Product Project.”
Koji expanded the product range to include microtomes and scalpels, making medical devices a pillar of KAI. These new fields of technology also contributed to the development of razor sharpness. In 1998, the world’s first three blade razor, K-3, was born.

The K-3 exploded in sales, and it became widespread in television commercials and campaigns. Koji also introduced new measures for KAI USA, whose business conditions had been deteriorating due to the strong yen at the time. He believed that what’s sold in the US should be designed by Americans, and that it is best to make them in the US. In 1996, a 25-year-old factory manager worked with 10 employees to start developing a multi-tool with an included pocket knife. Through trial and error, the product was finally completed in 1997.

In addition, KAI USA entered into the US and European kitchen knife market with the luxury Shun series. Released in 2002, it became a big hit. Besides production and sales, Koji started overseas production and product procurement for the Japanese market. Starting in 1992, he established three production bases in fast-growing China. The aim of overseas production was to establish a production system that is resistant to fluctuations in exchange rates and costs. Although there were trials and errors at that time, overseas projects have become a source of success and have contributed to the development of KAI.