The past and present of Kai Cutlery (H.K.) Ltd.
which is celebrating its 40-years anniversary.

Asia is a big market for KAI. Kai Cutlery (H.K.) Ltd.
is celebrating its 40th anniversary next year and is taking a leading role in the Asian market.
Here we introduce its past history of targeting the Chinese market
and the future outlook for taking on the entire Asian market.

Taking charge of supervising in an Asian hub

In 2018, KAI Hong Kong will celebrate its 40th anniversary. Ryota Aoki, who became general manager five years ago, says, ‘The Hong Kong region sales are steady, focusing on the local market.’ Chan Ka Yuk Gareth, who is in charge of domestic retailers, also added ‘We have two KAI SHOPs in Hong Kong holding events directly appealing to end users, and our continued support is also trusted by customers and buyers.

’ KAI Hong Kong is an important base for overseeing the whole of Asia. Until now, it has played a major role as a gateway to China, but as the liberalization and revitalization of the Chinese market has progressed, a viewpoint on the whole of Asia is being anticipated.
‘Compared with the USA and Europe, Asia’s achievements are still low. By collaborating with the international department at the headquarters, we can make the best use of our geographical advantage to build a close relationship with the entire Asian market,’ says Aoki.

Also, as a large business there is OEM for houseware and beauty care products.
In addition to the technology and quality of KAI, recently, marketing perspectives and proposals for designability are also required. ’Our role is evolving from OEM to ODM = Original Design Manufacturing,’ said Wong Hung Tai, OEM's representative. By having many manufacturing bases in Asia, it is possible to meet the various needs of customers by combining different products and also possible to adjust for tariffs by choosing where to ship from. Utilizing geographical advantages, Hong Kong plays an organizing role as the hub of Asia. 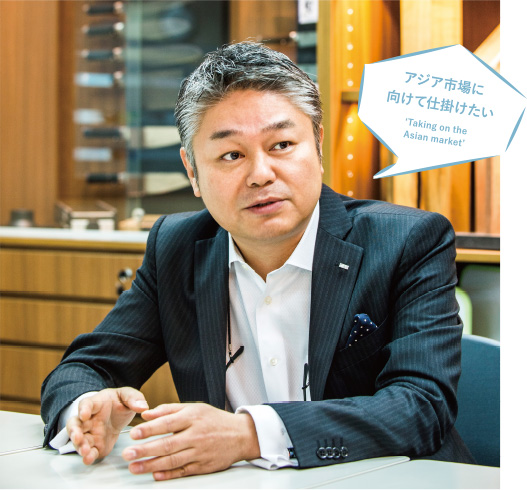 Ryota Aoki／General manager. Fifth year in Hong Kong after working for the sales division and international department in Japan. ‘I would like to see KAI products permeate the Asian market’.
Mr. Wong Hung Tai／OEM Manager, Executive Officer. ‘We are working as a team in Hong Kong, Japan and Guangzhou’. 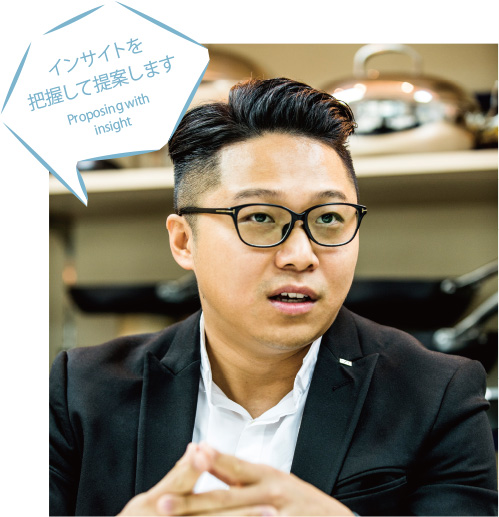 Chan Ka Yuk Gareth／Domestic Retail. ‘Although it is a historic brand, I would like to raise the brand’s power and increase awareness of it.’

In 1983, an office was launched, initially a small expatriate office mainly following up on sales agents. Imported and sold woolen scissors (sewing scissors) from Japan. There was one Japanese resident officer.

In 1988, in commemoration of the 80th anniversary of the foundation of KAI, over 600 production and sales department workers from Japan visited Hong Kong for the first employees’overseas trip.

In 1991, relocated office to Chai Wan, converted to a full-fledged warehouse function with an inventory of housewares, beauty products, and razors, and import sales began at full scale. There were three Japanese staff members.

In 2000 when KAI was launching the world's first three-blade
razor, the K3, a two-story tram was commandeered
and covered with wrap-around advertising for the K3. Hong Kong's 2nd KAI shop opened in March 2016 at the mall in the Kwai Fong area. Like shops in Shanghai, it has become a shop with a sense of unity, setting common concepts throughout Asia. ‘The people of Hong Kong like new things. ”Shun” kitchen knives are the best selling products, and the market for confectionery tools has been growing rapidly in the last decade,’ says MamiyoImura who is responsible for Asia's overall VMD.
Taking into consideration the crowded and expensive land circumstances of Hong Kong, showcases are mobile, appealing to a high-class image with a wooden store design. ‘Kai Shop’ shows the product precisely in a direct market atmosphere.
MamiyoImura (right) and shop staff who actually manage the shop. They choose basic kitchen products such as food turners and ladles as their recommended products. 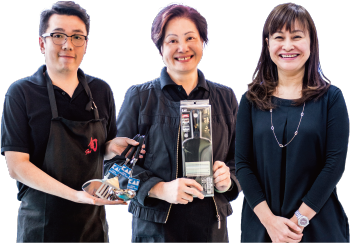