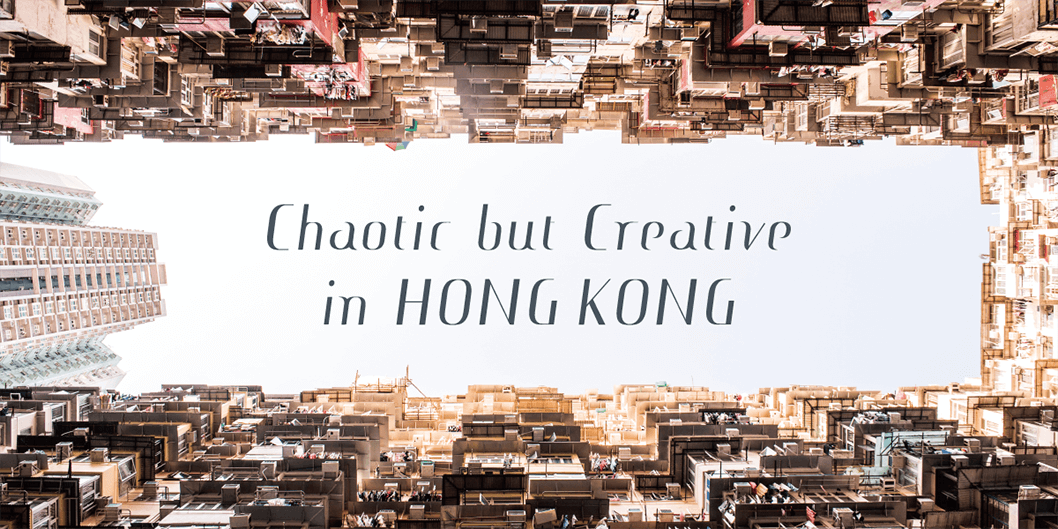 Hong Kong is seeking the new, and is not afraid of change.

Having long accepted creativity from around the world,
Hong Kong marches into the future.

In Hong Kong, one of Asia's leading hub cities, the creators of world standards are gathering and Hong Kong's potential naturally continues to grow. A unique culture formed by the intermingling of both locals and foreigners creates a chaotic atmosphere in Hong Kong. But it is not simply chaos. The Hong Kong quality which has been forged in this chaos is now reaching maturity.
Hong Kong is a city built into mountains.
It is riddled with many slopes and stairs.
A public elevator may appear on any
street you find. The city spreads as it
moves upward as well as sideways. Hong
Kong is a true 3D town. 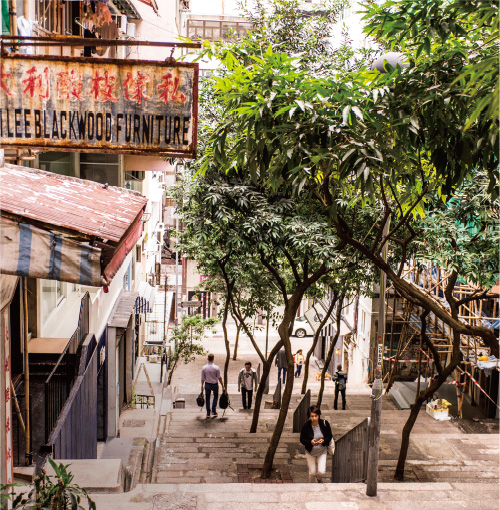 PMQ was used as a police residence after the central school where Sun Yat-sen also attended was demolished. The closely lined shops looks delightful.
Behind the modern main street, there is still the classic
Hong Kong: products arranged on the streets outside the
stores, flashy advertisements, street corner stalls. At first
glance, it seems there is no harmony, but they are all
wonderfully blended into the Hong Kong landscape. 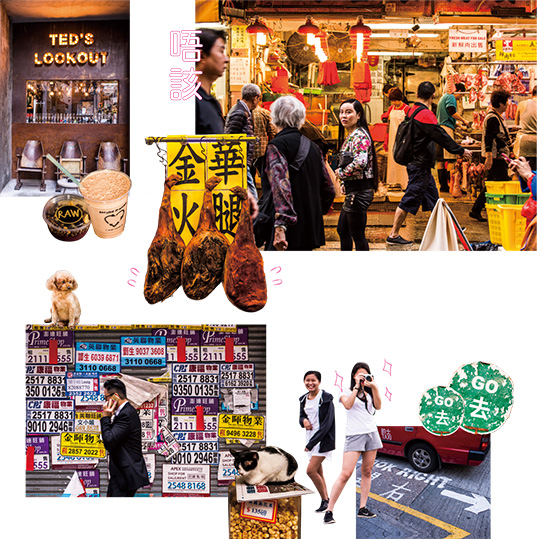 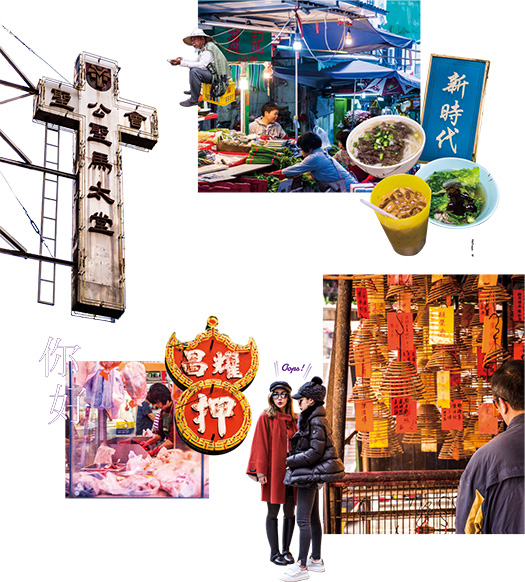 The classic image of Hong Kong with ‘enough signs and
billboard to block out the sky’ is slowly fading from the
public’s perception. Still, traditional Hong Kong attracts
tourists and reflects the everyday life of the locals. The
people of Hong Kong are not afraid to accept change,
yet locals still continue the customs of Hong Kong.

In Hong Kong, you can appreciate the works of
famous artists not only at galleries and museums,
but also at French restaurants and more. The
spectacular sensibilities particular to Hong Kong
scale up the restaurant quality. It is hip to view art
while eating. 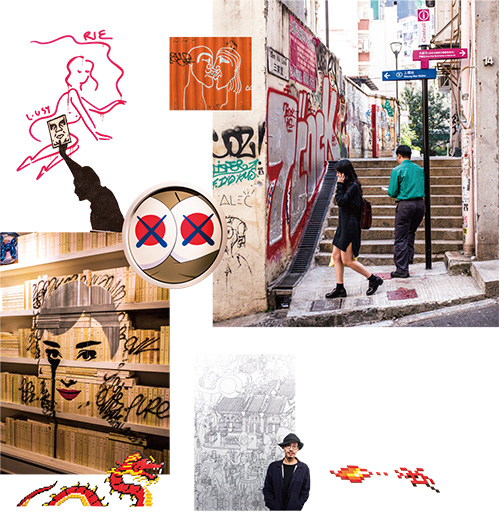 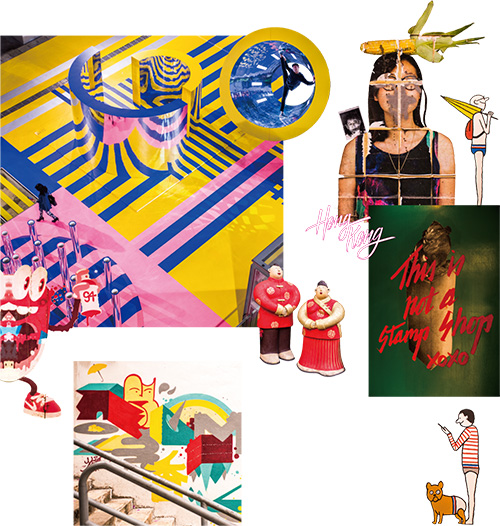 If you walk around town you will encounter graffiti and street art.
It blends well with Hong Kong's chaos. The PMQ is actively
inviting young writers and artists and becoming a popular
hangout for creators and designers.
From SOHO to Lan Kwai Fong is known as a sleepless amusement quarter. Both Asians and westerners, locals and tourists, are enjoying the atmosphere together at restaurants and bars in the style of various countries. Every corner is bursting with energy. 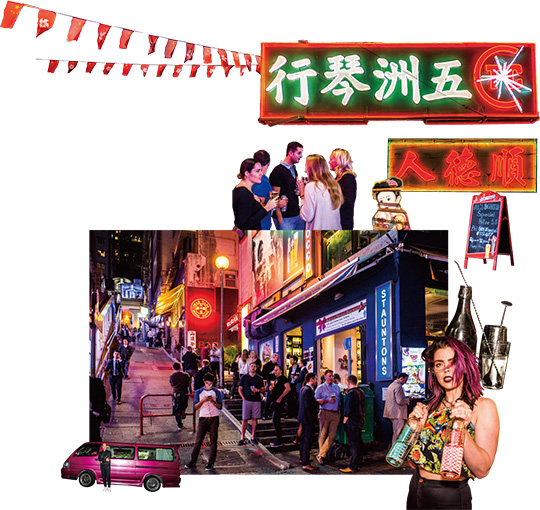 Recently many restaurants in Hong Kong have been setting new trends. Some stores have their interior fully decorated with models of butterflies, and what may be a hand-carved seal shop or a railway office at first glance may actually be a restaurant with a hidden door.

What the creators of world standards fashion
from chaotic Hong Kong

Hong Kong has long reigned as a hub city of Asia. People and goods are gathering from and spreading out to the whole world.
Various peoples are living together and developing businesses. Hong Kong has been accepting many foreigners with her deep and wide melting pot, juxtaposing them with density of the country, and this is enhancing her creativity.

Chris from Eight Partnership is a Norwegian. He is working with worldwide clients such as Cathay Pacific, Apple, and Coca-Cola. ‘Hong Kong's creativity is rising and I feel that it is becoming an ideal working environment for me in the last five years,’ says Chris.

Hong Kong’s people are freely traveling around the world. Gina spends half of her time staying in London finding quality films. ‘I can screen movies in Hong Kong which will be censored in China. I want to make many opportunities for people to see more independent films,’ says Gina, trying to raise Hong Kong's cutting-edge art scene.

Marc, Swiss, and Roberto, Italian, from AWAWA are creating wooden structures without using any metal parts, getting the idea from a Japanese traditional carpentry and joinery method.
‘The idea of sustainability is rising in Hong Kong and there are many people bursting with curiosity who seek change.
I feel that everything is possible here,’ says Marc. ‘There are many people who know good products of a world standard in Hong Kong.
I think that the people here have similar sensitivities to the Japanese,’ says Eiichi from OMOTESANDO KOFFEE, which is offering a Japanese style cafe experience.
Hong Kong has the capacity to accept the world's highest quality standards.
Over the past several years the movement of manufacturing has become more active.
World-standard sophisticated creativity is born out of the multicultural society of Hong Kong.