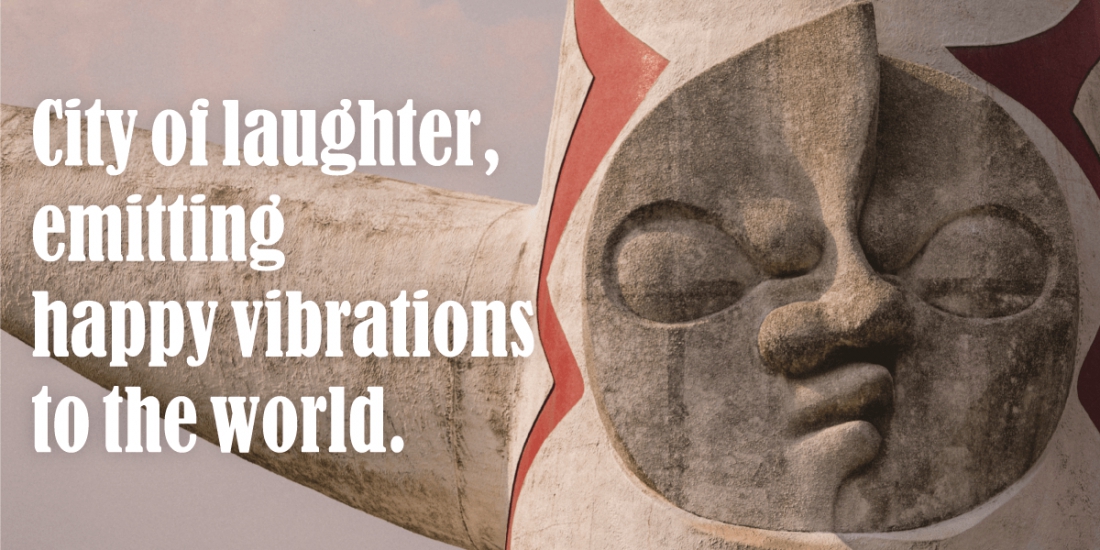 Osaka’s people are known for their rich personality.
The average Japanese person may seem at times politely distant, the people of Osaka in contrast seem direct and friendly.
Though once you get used to their colorful personalities, cozy relationships are easily born.
In the end, you can build relationships that make you smile.
Laughter is a big factor in Osaka’s unique personality.

In front of this special billboard, languages from all over the world flutter about and there are many people who fit into pictures, taking the same pose as the man on the billboard. Sightseeing boats around the Dotonbori River also pause for a photo opportunity. Through each and every social media, OSAKA will be relayed to the world. 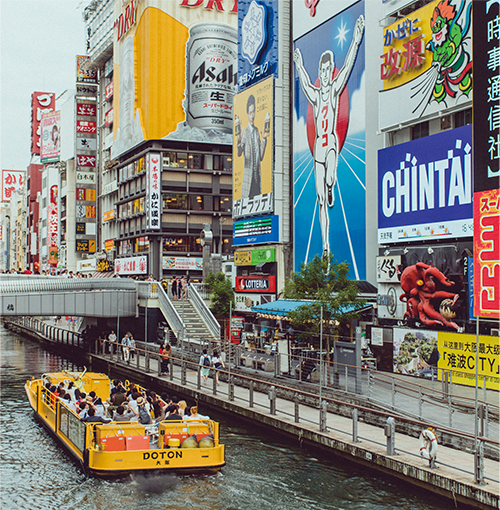 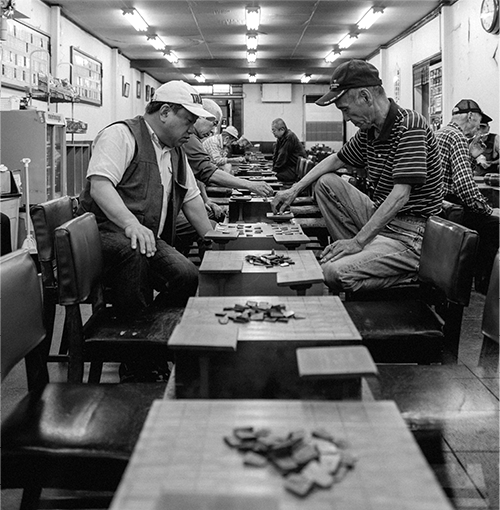 In Shinsekai which has been growing in popularity recently, Shogi (Japanese Chess) was a main communication tool. They do not care at all for being pointed at by cameras, they are fully focused on their games.

‘PIZZA STAND NY’ just opened in the American village which has nurtured Osaka's youth culture. You can purchase pizzas at the counter facing the street. The iconic image of people biting into a pizza on the street goes well with ‘Amemura’ (American Village). 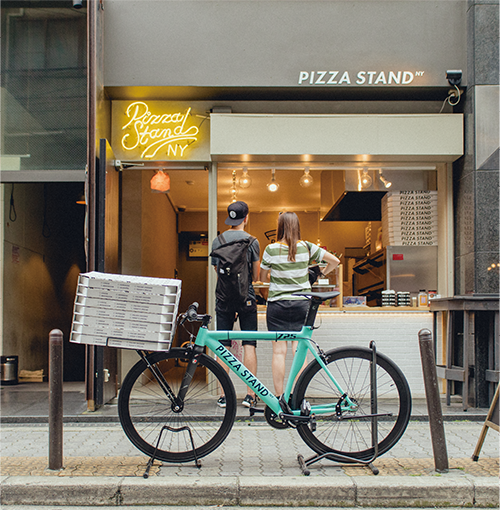 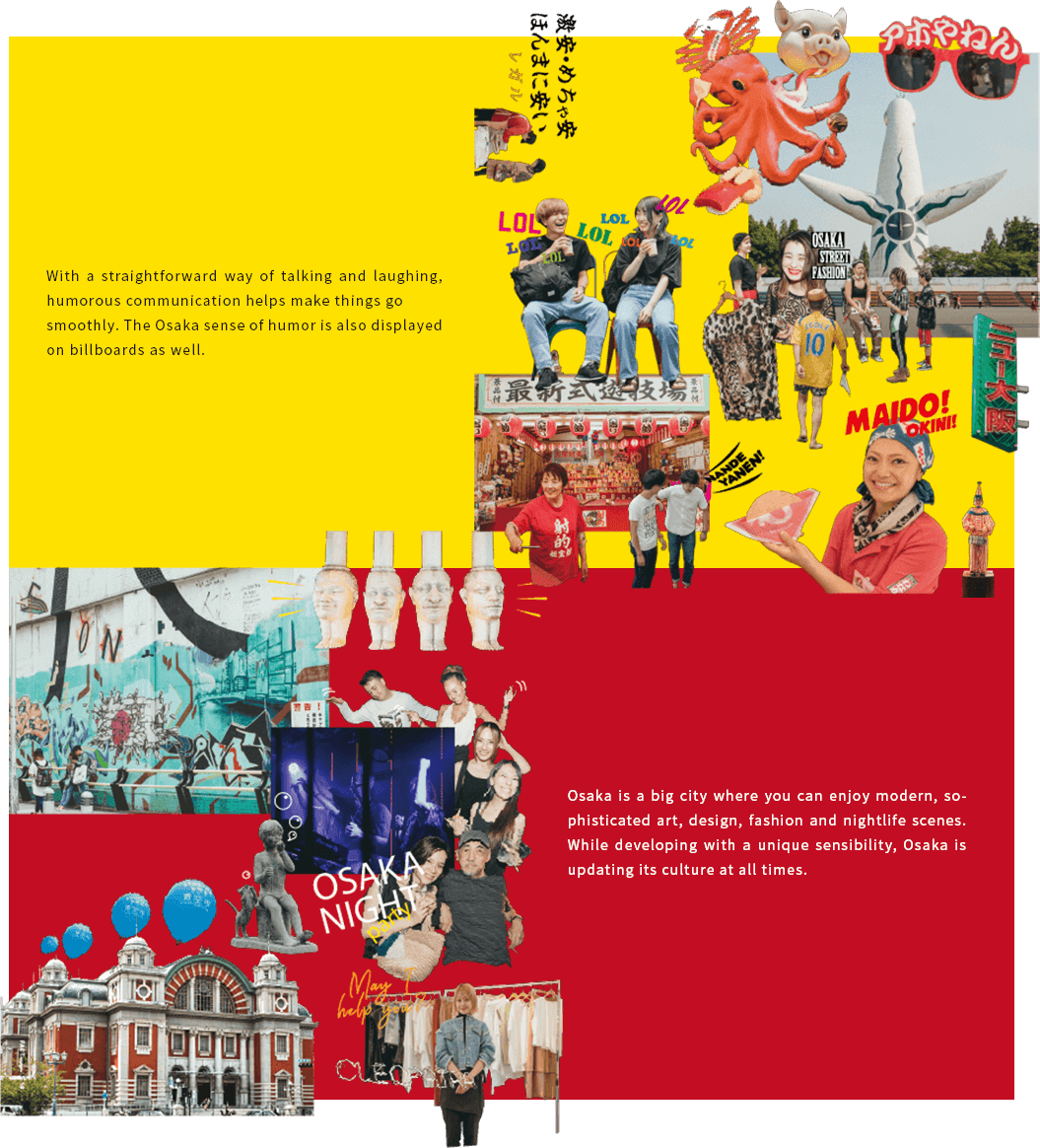 Is there really something called ‘Osaka-like’ creativity? First of all we asked Taro Kida, who represents Osaka’s image in the deepest sense. He has composed the theme songs of many shows and you may have heard his music without even knowing it. His music is etched into the heart of the Japanese people, especially those in Osaka. ‘The lyrics must come directly into your ears, and if the Osaka dialect is in the lyrics, you need to use it with an usual spoken accent. Especially if the nouns are not accented properly, people might not understand what you are trying to say’. Taro Kida who kept making songs is conscious of Osaka's distinctive ‘sense of words’.

Likewise, Eiko Tanaka, a select shop director and brand designer, feels a familiarity with the community born from the Osaka dialect. ‘Even if our age or interests differ, we can relate together. That is Osaka. Since the size of the company is small, other staff members will tell me their frank opinion. The relationship is very rewarding’. Osaka people feel close to each other, and pressure to conform is not strong, they respect each other's individuality. ‘The Osaka dialect may seem like a strong language, but thanks to that it is difficult to have a serious fight. Actually I think that it is a much softer way of communication’. Unique and direct communication have a big role in Osaka.

In the late 1990s, many new shops were opened in the Minami Semba area. ‘KEN HAMAZAKI RED MUSEUM’ was launched in 1992 and pioneered this kind of shop. At the time it was still rare for artists to set up their own gallery. Hamazaki says that an artist has to be absolutely unique and he has performed only about 10% of what he wants to do. ‘When I was a student, I was doing sports, but I can’t keep active all my life. Although most things will deteriorate with age, art is the only aspect of our lives where it grows sharper with age. You might be able to do your best work just before dying’. If the accumulation of the will of the local people and land makes art, Ken Hamazaki's work represents Osaka.

Finally, the most Osaka-like creativity is ‘laughter’. In Osaka’s laugh DNA, ‘Yoshimoto Shin Kigeki’ which lasts for 50 years have influenced many things. Even though it is a traditional comedy, it is difficult for it to survive if it does not change with the times. In that sense, Kazutoyo Koyabu who is currently one of the chairpersons there plays a big role. ‘My script consists from 70% traditional and 30% unconventional comedy, It is useless if only I get the attention of laughter. I am just taking my role to pass my baton of comedy on to the next generation in good form’. Osaka's laugh tone and manner now dominate the whole country and Koyabu’s pure spirit of succeeding and evolving local creativity is becoming the foundation of such domination.