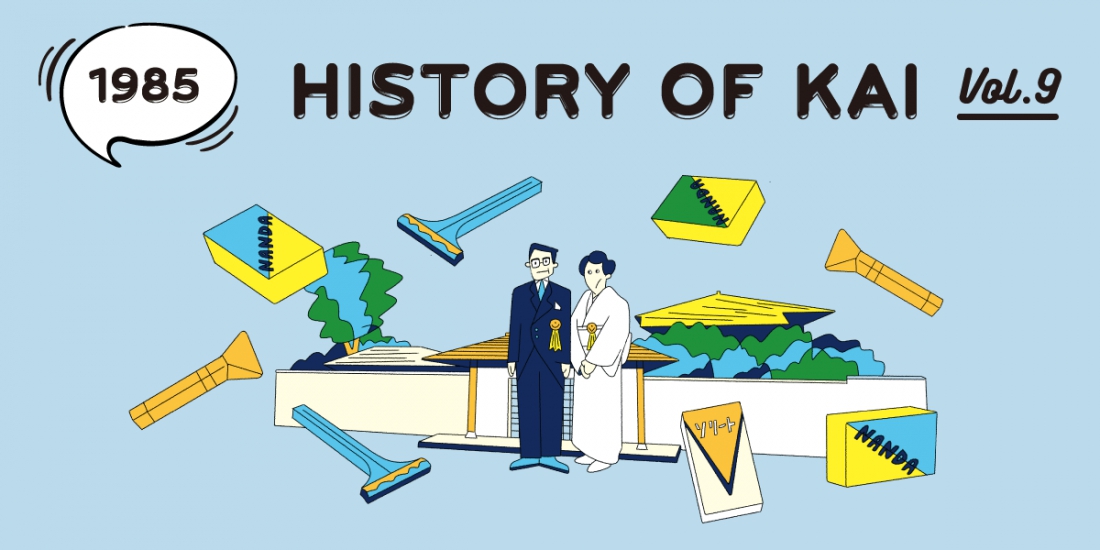 Saijiro the second had determination to make original products, and new product development was promoted under the direction of the new plan manager in 1958. Moreover, with Saijiro the second’s ‘Developing at least one product for every 3 months!’ idea, a new attempt was made to ask for ideas and designs for the design department of the Tokyo University of the Arts. As a result, products lineup increased dramatically and Saijiro decided to make three divisions, cosmetic goods, household goods, and DIY and further product development was handled by each division. Along with expanding markets, in 1966 Saijiro imported Swedish stainless steel instead of domestic steel. He invested 1 billion yen to renew the production line and decided to automate production.

In addition, Saijiro focused on PR and developed topical products that draw the attention of consumers, apart from standard items. Innovative products such as the assembling razor ‘Nanda’ in 1982 and ‘Melody scissors’ in 1987 which literally make sounds and became a hot item. In 1983, in the quiet residential area near the Oyana factory, Mr. and Mrs. Endo's residence ‘Shionan' was completed. He got an idea during an overseas visit when he was invited to the home of the company owners, rather than a hotel or a factory, he could feel much closer to them. He wanted to offer the best hospitality to his guests and gathered masterpieces in the tea room and his wife Hisako served tea. In addition, it is used for employee events and conferences. This is also consideration for employees and cherishing the bonds with them. In addition, Saijiro took employees on overseas trips. In 1988, celebrating its 80th anniversary, a large groups with more than 300 from each of production division and sales division were divided into two teams, and went to Hong Kong. The Hawaii trip for their 100th anniversary was their fifth overseas employee trip.

In 1985, there was a brilliant event for the history of KAI. It was first time in country to receive the Medal with Yellow Ribbon in two generations for the invention of a disposable convenient razor. Saijiro held a celebration party inviting all of the employees to thank them instead of inviting celebrities which was common for this style of the party.

By the way, as mentioned above, Saijiro focused on PR and one example is the introduction of CI (corporate identity) to spread the KAI brand. It was his son, Koji Endo the third, president of the current KAI group who took responsibility. With the cooperation of Sony's creative general manager, Yasuo Kuroki, Koji studied CI which was not common at that time, and for about a year and a half he studied continuously, He refreshed the logos and packages. In 1988, the KAI edge mark was adopted, and companies are integrated as ‘KAI Group’. As if he was relieved by Koji’s work, the following year, Saijiro took his final breaths while watched over by his family. He was 64 years old. His foresight and effort led him to be called ‘Razor King’ and his unique character has been handed over to KAI today.