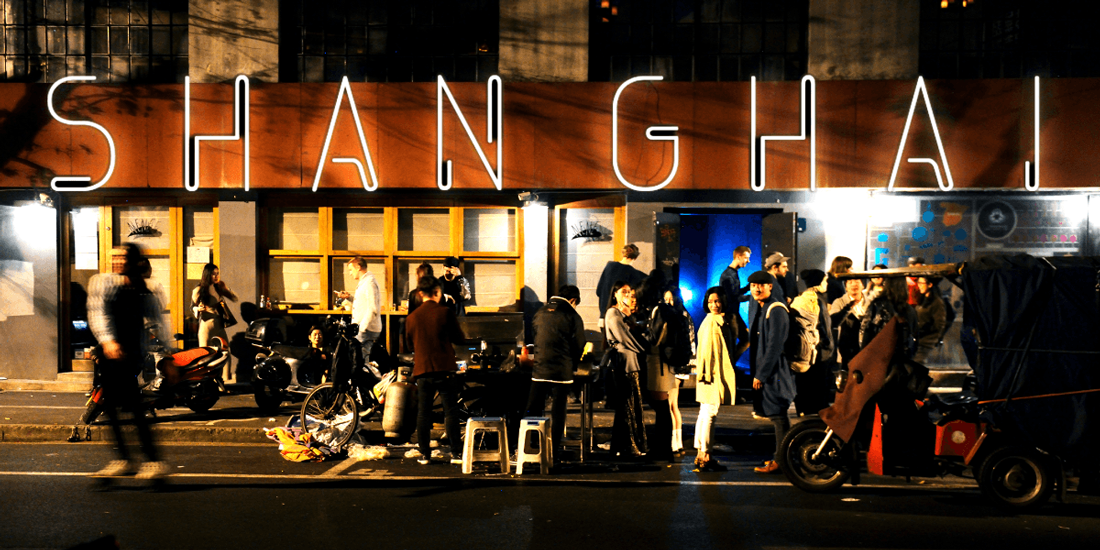 New Shanghai has an eye for beauty.

As evidenced by the number of Chinese tourists who come to Japan and go on shopping sprees, the Chinese economy continues to grow every year.
While many comment on the sheer amount of stuff the Chinese buy while abroad, the fact is that the main motivation for buying abroad is a desire for high-end goods.
The people’s desire for quality products has been growing gradually over time and is evidenced in their fashion, art, and food culture.
It’s quite obvious that the desire for high-quality goods is taking root in Shanghai.

The Fall 2016 Shanghai Fashion Week was held in April at a venue in Taipinghu Park,
that was set up specifically to host the event.
Even though the attendees dressed similarly to their counterparts in Japan,
Shanghai’s youth have a very distinct sense of style. 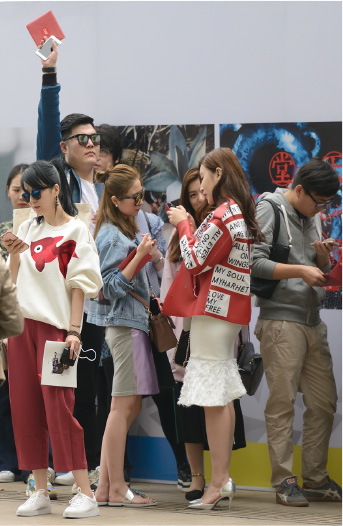 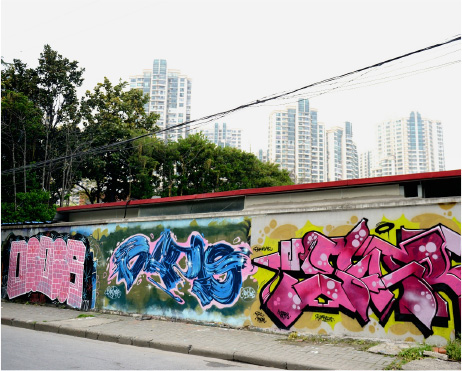 M50, the center of Shanghai’s art scene, operates out of a former spinning mill that was built in the 1930’s. Colorful graffiti decorates the outside of the building.
Reporters, from all over the world,
flocked to the venue hosting Shanghai Fashion Week.
The biannual event showcases over 500 different fashion brands. 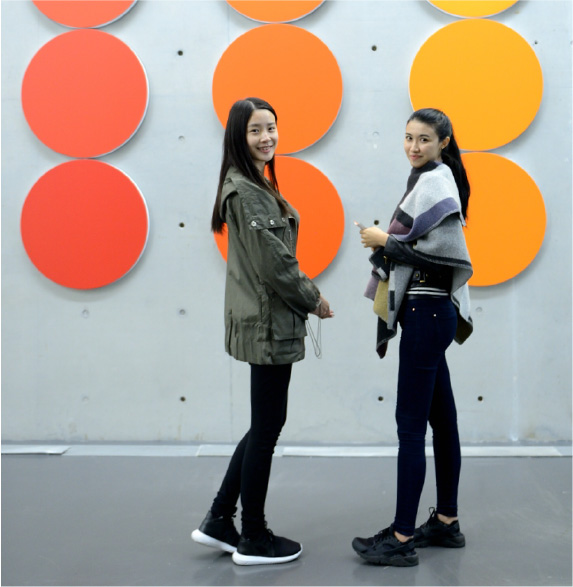 Karen (right) and Grace (left) visited
the Olafur Eliasson Exhibition.
They explained:'We often visit the Dragon Art Museum searching for what is new in the world.
The museum is located along the Huangpu River
and it has a nice atmosphere.' 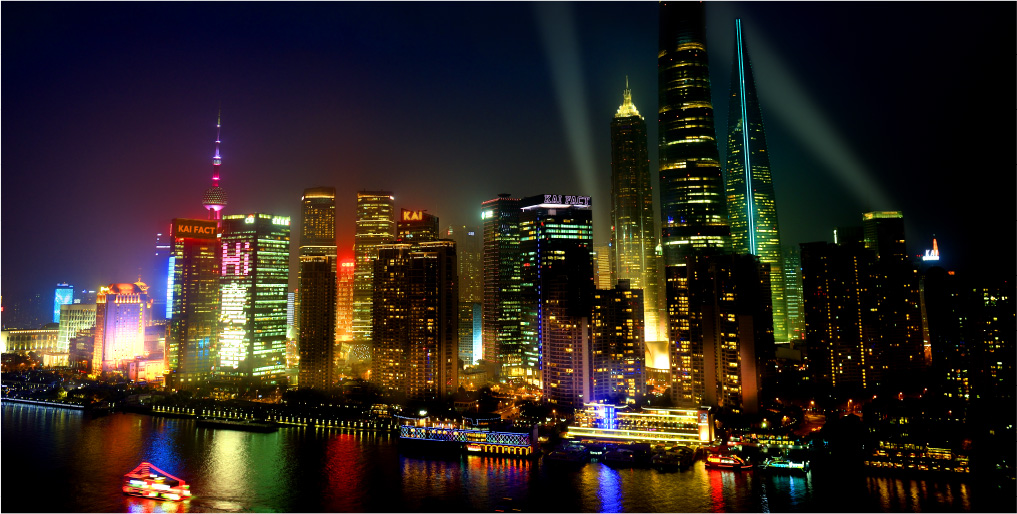 The panoramic rooftop view from the Hotel Indigo,
which overlooks both sides of the Huangpu River.
The characters for ‘Hi Evil City’ are written on the wall of the building.
During the 19th century, Shanghai truly was an ‘evil city’ due to its opium production and high crime rate.
Shanghai’s youth, however, have put a positive spin on it and refer to their city as the ‘cool city.’

The Shelter, a nightclub located on Yongfu Road,
is a renovated bomb shelter.
Heavy bass sounds welcomed us to the club. 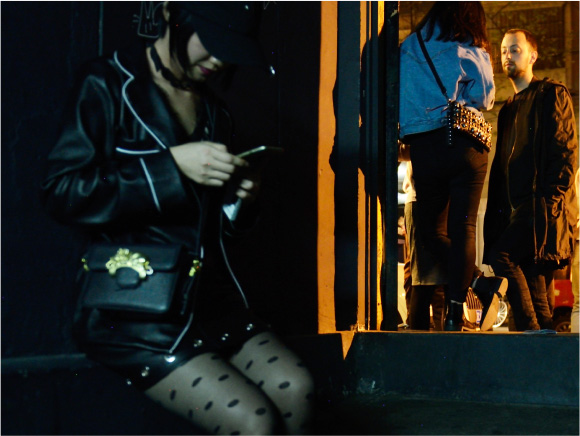 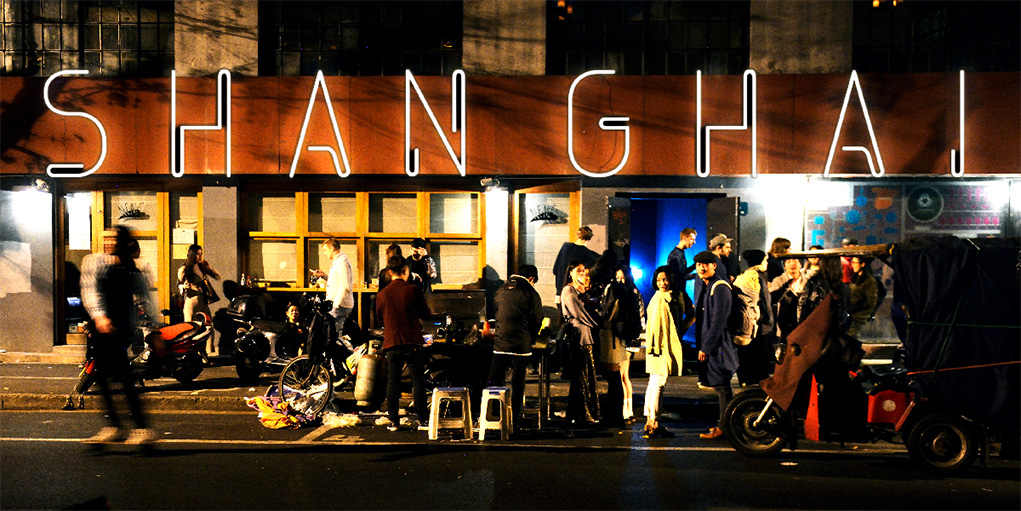 The nightclub The Shelter invites famous DJs from around the world.
Among them: DJ Krush and DJ Mitsu the Beats, both from Japan.
Music lovers, seeking high- quality sound flock to this club. Club pics from Le Baron and The Shelter.
We asked: 'What can you tell us about the people of Shanghai?'
They responded: ‘We have a real sense of globalization because of French and Japanese colonization.
We like new things. Street brands - DOE, for example, are becoming popular.’
Local fashionistas gather at Shanghai Fashion Week. They are not only intere-sted in Parisian and Milanese fashion. They also enjoy small unknown brands. 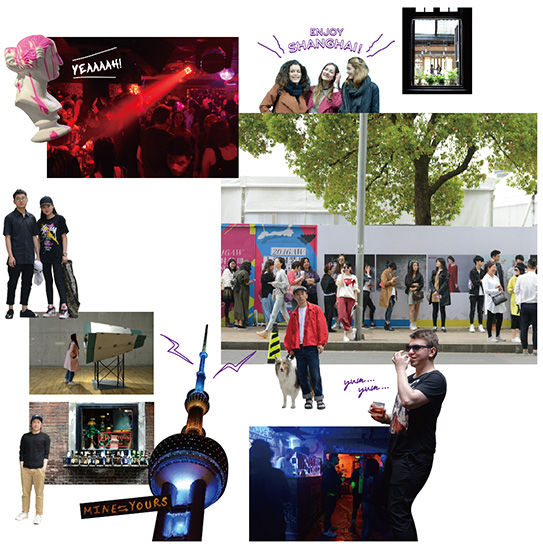 With its 632 meters high Shanghai Tower, Disneyland, and huge shopping malls, Shanghai is booming. One may be under the impression that because of China’s rapid economic growth, its people have lost sight of quality. Shanghai, however, disproves this assumption. The people of Shanghai have a deeply rooted cultural foundation built on the backs of pioneering entrepreneurs.
Gary Wang's club, The Shelter, opened in 2007. There were no decent clubs in the area at the time. Gary invited famous DJs from around the world to perform at his club. The popularity of his club grew and it is now a gathering spot for people who love good music. After being in business for 10 years, Gary is looking for ways to further his business. In his own words: ‘I want my club to be of the highest caliber. I’m on my way.’
Rocky Liang is also a literary pioneer. Rocky started his career as the creative director of Life magazine back in 2006 when only news magazines were being sold. 10 years later, Life has become a true success. Last year he became the creative director of The Mix Place, mixed lifestyle stores that emphasizes high-quality living.
Island6 are pioneers of high-tech digital art. Their art, which combines LED lights and traditional paper crafts, has gained many fans due to its uniqueness. 15 people make up island6. They come from different countries and have different professional backgrounds. Thomas Charveriat, island6’s art director, explained: ‘We want our diverse crew to help us share our art with the world.’
Dongliang, a boutique located on Fumin Road, is well regarded by fashion enthusiasts. About 10% of the store's selection come from Chinese designers who are well regarded by Parisian and Milanese. Unknown brands, however, are prominently displayed on the first floor. Dongliang’s CEO, Justin Peng, explained the reasoning behind such a choice: 'We want to give new designers a chance to inspire the next generation.’
Shanghai may appear to be a consumer metropolis; the existence, however, of these savvy businessmen proves that the people of Shanghai care about quality. By digging deep into the city’s culture, one can see the true essence of Shanghai.