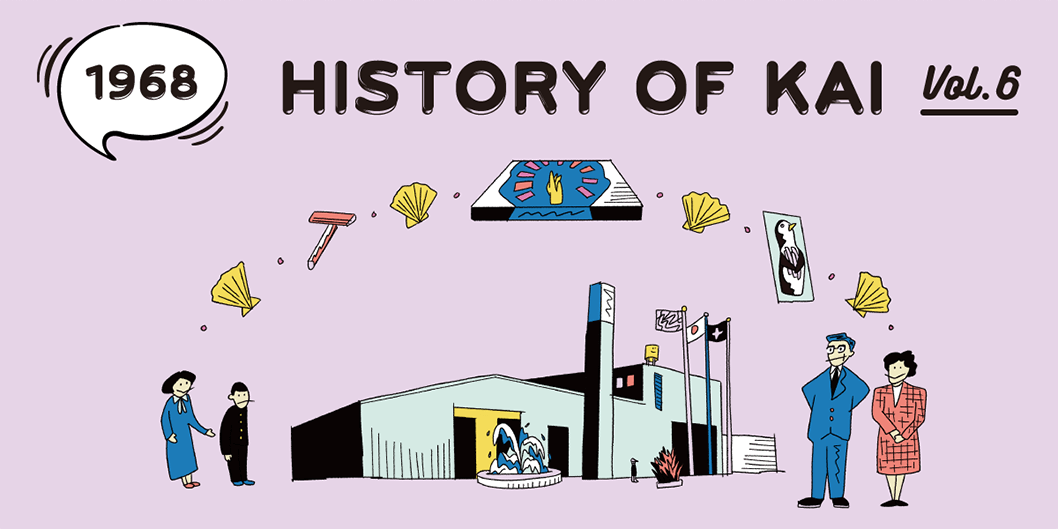 Family love and support. It became the cornerstone of KAI.

1964, was a year full of crisis for KAI. High economic growth had come to an end and the number of corporate bankruptcies reached the highest level since post-war records began. In 1965, Saijiro II aimed to make progress through the crisis with his slogan‘all our efforts into policy!’ The retired former vice president launched a razor factory, and the company which had sold about 90% of KAI nail clippers stopped handling orders. The aftermath of the past crisis remained. Saijiro established a small factory, reduced the production of nail clippers, and strengthened the sales structure for razor blades by implementing different marketing policies. There was a freshness in making that decision without any hesitation.

As part of strengthening sales, Saijiro organized a trip to Hong Kong and Taiwan, inviting 15 cooperative sales agents. It was the founder Saijiro’s dream to travel abroad, and his widow Hiro joined the trip with the founder's dream in mind. On the last day, upon a sales agent’s request to ‘meet’ the founder, Hiro gently took out his portrait from her bosom. It was a heartwarming moment and everybody was moved by the couple’s genuine love.

In 1965 KAI received the industry's first ‘G mark’ designation, showing a superior safety knife set. In 1967, KAI broadcast their first TV commercial and a five-story building was completed in Iwamoto-cho where the current Tokyo head office is located.

In 1968, the Oyana factory (currently the Oyana third factory) dedicated to an integrated production system for a convenient razor was finally completed. At the ceremony, there was a lovely scene when Saijiro's eldest daughter Fusako and eldest son Koji (current president of KAI Group) cut the tape. At the time Saijiro was striving to raise the funds for purchasing a hectare of land. His wife Hisako helped him with her jewelry and untouched betrothal money. The factory’s construction cost was about 270 million yen. The cash flow was tight, but this decision raised the KAI group's performance later and became the cornerstone of its development. The integrated production system was completed around the year 1975.

Meanwhile, Saijiro’s midlife was spent fighting illness. He had suffered from diabetes since the age of 34 in 1959 and overwork and stress were also contributing to his condition. At the end of 1971 his liver worsened, and he was often on the brink of life and death. His wife Hisako not only nursed Saijiro but also attended ceremonies on his behalf. However, there was no major sign of recovery, and in 1972 he was transferred to a national hospital in Nagoya, and no visits were allowed. Hisako traveled back and forth a distance of 100 kilometers from Seki City everyday, doing both housework and office work at the same time. His children also cooperated. It was in 1973 that Saijiro was finally able to leave the hospital. It can be said that the present KAI leader also relies on such ‘love and support’ of his family.