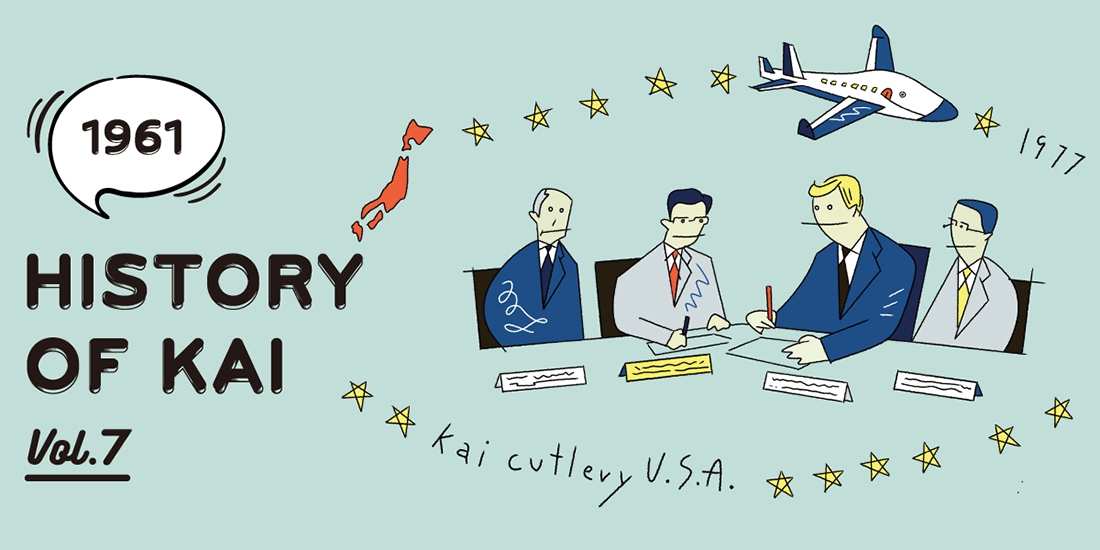 Through direct interaction,
the door to the world has been opened.

One of the things that KAI has cherished most carefully since its founding is socializing with its customers, cooperating companies, and local people. Inheriting the teachings of the founder that ‘face to face communication is the foundation of success in business,’ Saijiro the 2nd valued communication with people and often went to great expense, organizing cormorant fishing tours and factory tours with his business partners. In 1979 he invited many customers to the Gero hot springs, rented out a train, and his employees dressed up in livery and entertained their guests. These unique and sincere welcomes were much appreciated by the invited guests and led to the establishment of a solid distribution network.

Saijiro was also active in overseas expansion. Again, under the motto ‘face to face,’ he went on his first overseas trip to the United States in 1961. It was not easy to get a visa at the time. There were also restrictions on taking American dollars out of the country. While it was difficult to travel abroad, still he visited potential customers, factories, toured around, and analyzed the market all by himself. As a result, in the United States he manufactured his goods as OEM products, and in Europe started selling KAI products directly. KAI products sold as Japanese exports became known for being good value and reliable, and KAI received the first award for an export-contributor company.

Although it was in 1965 that Saijiro began working on exporting in earnest, export had begun long before that. The first exported items were the ‘Shozaburo Lasha scissors.’ They were shipped to Hong Kong in 1956. In the same year, nail clippers with a knife (under the SHELL brand) were exported to Venezuela in South America. They sold so well that production could not keep up with demand. Since 1967 when overseas communications became more active, overseas inspection trips were held every year and their frequency gradually increased. In order to know the trends of overseas products and to grasp new business hints, export sales were limited to up to 30%, and from 1968 on Japan began importing superior goods and parts from the UK, Germany, Finland, etc.

At that time, though there was a policy to export commodities made in Japan, the KAI brand gained momentum to do overseas production in the 1970s. In 1974, KAI established its first liaison in Dusseldorf, West Germany, and in 1977 established a local subsidiary, KAI Cutlery USA, Ltd. (Currently KAI USA, Ltd.) in Portland. Manufacture of pocket knives in the US started. In 1980, the West German liaison was transferred to Solingen, known as the ‘city of blades,’ and established a local subsidiary. In 1983 KAI also set up a base in Hong Kong.
Saijiro's enthusiastic ideas for exports, imports, local manufacturing, and overseas expansion was achieved over a long period of time. He said that he did not do any sightseeing wherever he went abroad but only visited factories, trade fairs, and potential customers from morning till night. The connection with people made with his own shoe leather and passion opened up the door to the world.